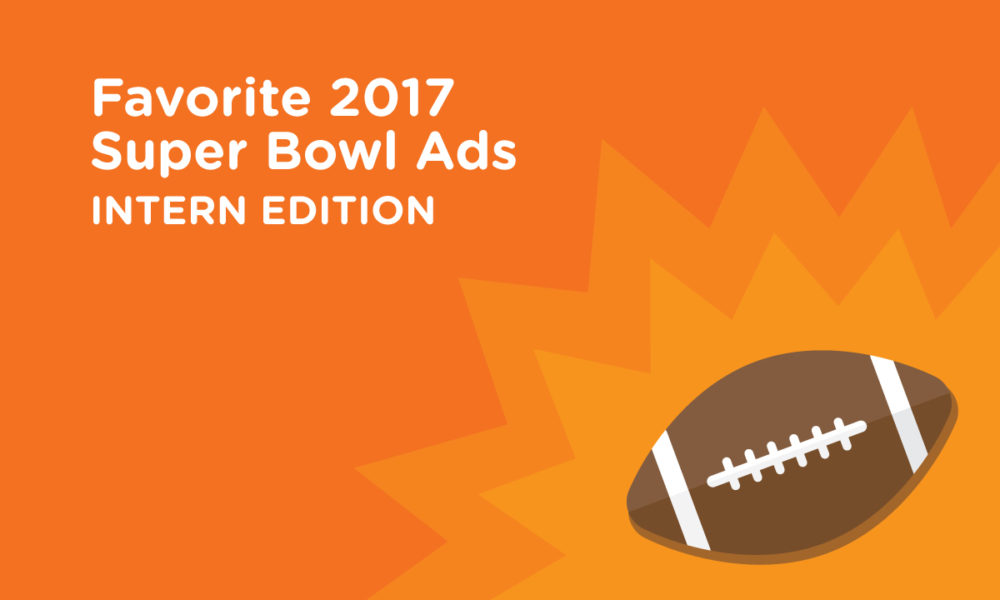 The Super Bowl is the biggest competition in American sports, and not just for the teams. Brands fight for spots to air their ads during this enormous event, spending approximately $5 million for a 30-second spot. With roughly 111 million people tuning in, the Super Bowl provides an exclusive opportunity to market to arguably the largest audience of the year. As interns at RD Thomas, we know the Super Bowl is an enormous event in the world of advertising. Here are some of our favorite super bowl ads that were aired on Sunday.

In one of the stronger Super Bowl LI spots, Anheuser Busch delivers an inspiring period piece to promote Budweiser beer, while also subtly promoting a pro-immigration viewpoint. The spot revolves around the journey of an initially nameless German immigrant from his home country to America with one goal in mind: “I want to brew beer.” After seeing clips of the hardships he faces, a man with an American accent buys him a beer, prompting the immigrant to pull a sketch of a Budweiser beer bottle out of his pocket. The American is revealed to be Eberhard Anheuser, and the immigrant is revealed to be Adolphus Busch. Just like that, a legendary beer brand is born.

Aside from being one of our favorites, this ad was a fan favorite too. According to USA Today’s Ad Meter results, this spot was the #1 rated ad that aired during Super Bowl LI. In this 60 second ad, comedian Melissa McCarthy stars as an eco-warrior; being called to save the whales, the trees, the ice caps, and the rhinos. She finds out these tasks are not easy as she gets disastrous results. This spot is humorous and effective while proving that there is a smarter way to save the planet—by driving the 2017 Niro Crossover. The ad was clearly a success, giving Kia almost as great of a night as Tom Brady.

Loren Angelo, vice president of marketing for Audi of America, stated, “You can entertain by doing one of two things. You can either introduce humor, with charmingly provocative wit, or you can speak to America emotionally” (Forbes). Audi chose the take the emotional route this year in their spot, “Daughter,” which aired Sunday night and sparked a lot of heated conversations on social media. The moving spot opens with a father watching his daughter in a boxcar race, starting last but passing the boys to finish first. As we watch the race, we listen as the father narrates his struggle in talking to his daughter about gender equality. While the ad got some negative attention on social media, it got equally as many positive reactions, including ours. Despite its mixed reviews, we found the ad to be a beautiful and powerful message.

Audi took a bold stance this year, sending a message to viewers about equal pay.

This ad made our list by having a wildly entertaining story with a lot of comedic relief. NFL Hall of Famer, Terry Bradshaw, is caught during a commercial break with a noticeable barbecue stain on his shirt. He proceeds to sprint across the field of play and eventually ends up in Jeffrey Tambor’s house watching TV; being told to relax as his shirt is being washed with Tide Pods. What makes this spot so unique is that during the pregame show, the barbecue stain can be clearly spotted and actually created a buzz around social media with people laughing and commenting on the stain. The commercial brilliantly picks up from that moment later in the game and is almost integrated into the action of the game.

Unlike Budweiser and Audi, Avocado from Mexico stayed away from taking a political stance in their spot, “Secret Society”. This ad caught our attention with its unusual setting and hysterical banter. The spot starts off by setting the scene in a meeting between members of a secret, Illuminati-esque society, who are discussing the health benefits of avocados. Avocados from Mexico attempts to find ways to keep the world’s biggest secrets from getting out, one of which is the good fats in the Avocados from Mexico. The attempt is unsuccessful as the members of the secret society are unable to keep quiet and let the world know about the health benefits of avocados. Avocados from Mexico managed to bring humor to a normally boring topic by talking about their product in an engaging way.

All in all, this year’s Super Bowl as broke new barriers and tackled big issues facing our nation. Budweiser and Audi drove home a message of inspiration and showed us anything is possible no matter who we are. The wittiness of Avocados from Mexico and Tide made us laugh and reminded us to stay loose. With effective messages, our favorite commercials showed us just how powerful advertising is. We are already counting down the days until the next big game and the many creative commercials!

The Ultimate Content Marketing Tech Stack You Need for 2022 Success

The Beginner’s Guide to Live Commerce

Ice-Cream made with fabrics / Une idée visuelle plus très fraîche?